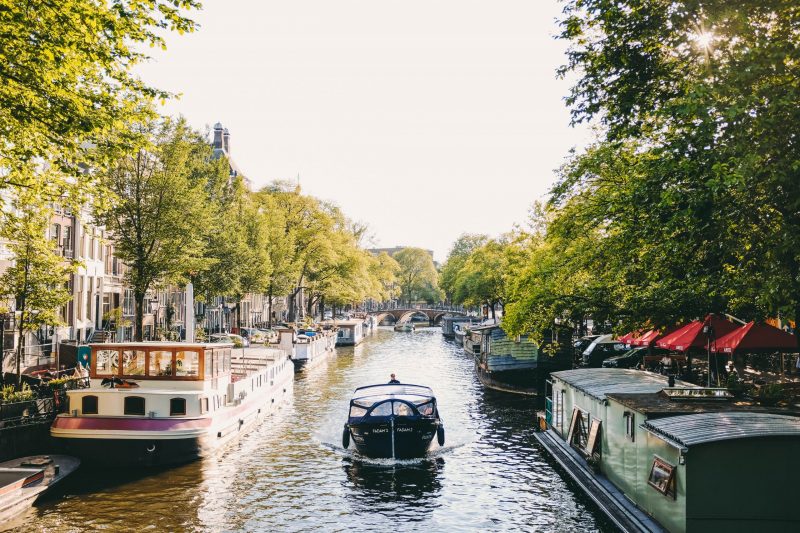 WHETHER COURTNEY AND I ARE STROLLING the picturesque canals brimming with majestic white swans or meandering through the streets on colorful Dutch bicycles, I never get bored of this charming, historic and vibrant city.

The best place to start is at the Amsterdam Tourist Board kiosks. They’re conveniently located at the airport and throughout the city. Their maps and brochures are easy to use and quickly get you up to speed on the where and the when, helping me feel right at home. Even after this pit-stop, if you find yourself lost, have no fear as everyone speaks English nearly flawlessly, so it’s easy to ask for help.

I always recommend the W Hotel in Amsterdam for its cool, modernity and convenience – it’s a mere 4-minute walk to Dam Square in the heart of the city. I am also a fan of their amazing breakfasts, which are brimming with incredibly healthy options that keep me fueled as I cycle about or at least until I find some Indonesian food. That may sound slightly bizarre, but Indonesia was once a colony of the Netherlands and from that relationship came a great cultural culinary exchange. So outside of flying into Jakarta, the Netherlands has the best Indonesian food to be found worldwide.

A few other favorite places to dine include Omelegg, which is the first omelettery in The Netherlands and serves delicious breakfast, brunch and lunch all day long. About a 15-minute walk from Amsterdam’s Central Station is PIQNIQ, an oh-so-charming cafe in the Jordaan neighborhood. Courtney and I have spent a many afternoon enjoying lunch, sweets and tea while taking in the phenomenal people watching. Also try Gartini or Johannes for excellent food and service or Arendsnest, which is the best beer bar in the city!

Aside from culinary tourism, a few of my must-see sights include the Van Gogh Museum. It houses the largest Van Gogh collection in the world. The main exhibition chronicles the various phases of his artistic life and is organized, chronologically, into five periods: The Netherlands, Paris, Arles, Saint-Remy and Auvers-sur-Oise.

Also visit the Anne Frank Museum, which is a moving tribute to one young girl who, along with seven others, hid in a small secret annex of a home in Amsterdam for two years to avoid capture by the Nazis during World War II. Her famous diary depicts the best of humanity as she is hidden and the worst, when she and her family are discovered and deported to concentration camps. The home and museum serve as a solemn tribute to all the victims of the Holocaust and reminder of the freedom we all fought so hard to win on behalf of the citizens of the world.

Don’t miss the Rijksmuseum, or the state museum, which is one of the largest and most interesting art museums in the world. It has an incredible collection of paintings and objects of material culture, prints and classic photography. It was recently rebuilt and modernized, so even if you have been there in the past, it’s worth a revisit!

And lastly, what is a visit to Amsterdam without imbibing in the national drink? The Heineken Experience is a visual spectacle and a fully immersive experience that will leave an impression. So much more than a beer served worldwide, at the experience you dig into the roots of the company’s founding and feel the passion that drives its continued success. After that, make sure you grab a selfie at the red and white I Amsterdam sculpture as a memento of your excursions!